Here is the list for volume 2. If you have suggestions to update, please let me know.

Note: The ones that are in italics are not in the History Through the Ages set. I have managed to find some of these online, and had to skip some. MOH 3 Additional Figures Set is an add-on set that goes with Mystery of History, volume 3 that can be purchased for $2.95 and downloaded from Homeschool in the Woods. (Scroll to almost the bottom of the page, if you follow my link.) World Geography Timeline Figures are timeline figures by Amy Pak that are sold by Heart of Dakota.

I am not receiving any remuneration from either Story of the World or Homeschool in the Woods for this post or any of the links in it.

Learning about Albert Einstein is one of the assignments in the Noeo Physics 1 curriculum. The book that comes with the curriculum is Did it Take Creativity to Find Relativity, Albert Einstein? Unfortunately, we found the book to be too dry, so decided to find a different one. Since we wanted to start reading right that minute, we went for a kindle book. We chose the book Who Was Albert Einstein? This book had 106 reviews with the average being 5 stars, so I figured it was a safe bet. Indeed it was. For a short fun read on Albert Einstein, this book was a great pick. Perhaps it was a bit more history and less science than the previous book, but I really don’t think that my third grader needs to understand relativity or E=mc2 too thoroughly, and he definitely enjoyed the history. He was most intrigued that Einstein’s theory of mass to energy conversion played a pivotal roll in the atomic bomb creation, and that Einstein petitioned Roosevelt to develop the atomic bomb, but was an avowed pacifist.

Ace did a notebook page (front and back) on Einstein. 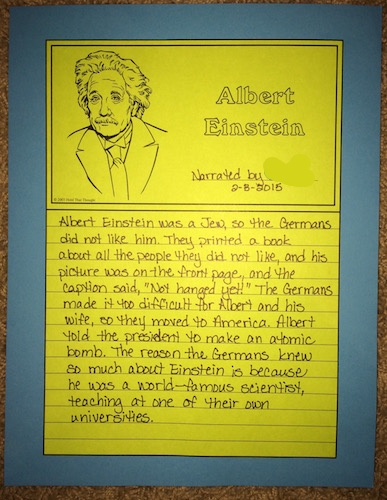 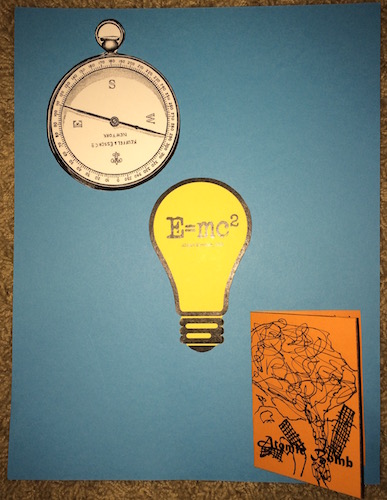 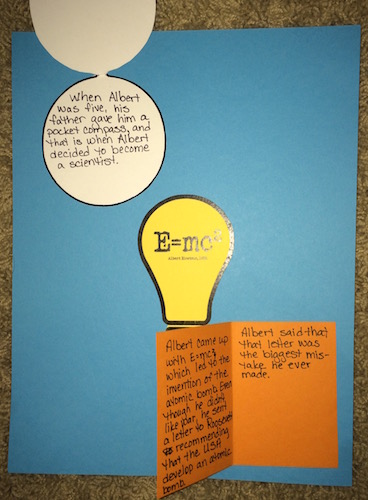 Everything was narrated by Ace and I wrote it out for him. The top picture is just his overall report on what we read. The inside of the compass mini book is about how a compass that was gifted to Albert when he was young sparked his love of science. The orange mini book is about the atomic bomb. The cover is a drawing of a mushroom cloud by Ace.

Sources for the notebook page:

Ace has fallen in love with audiobooks. Can’t blame him, I rather love them myself. It allows for him to “read” books that are considerably beyond his reading level, without my having to sit down. Of course, I still take time to sit and read, but the boy has been listening to audiobooks for hours a day, and I can’t read to him for several hours a day, unfortunately.

Last week he listened to the book Man’s Slave Becomes God’s Scientist: George Washington Carver. He loved it! George Washington Carver is just every boy’s best friend. After all, he escaped kidnapping; he got beat up and lived to tell about it; he was smarter than his teachers; and he loved dirt and bugs and all those boy kinds of things. That all aside, he makes for a worthy hero, so I love for my boys to admire worthy heroes. And he loved school, which is not a bad thing to encourage boys to love. (I said “boys” because actually others of us enjoyed the book, because we couldn’t escape it as it was being played over speakers loud enough for all of us to not be able to ignore, but fortunately we were all hooked.)

This was a total rabbit trail, and has nothing to do with any of our curriculum, but while we were on a role, we also checked out a book about George Washington Carver for younger kids: A Weed Is a Flower : The Life of George Washington Carver by Aliki and read that. That is a super well illustrated little book that I had read to my older kids once upon a time, and just had to read it again.

Rabbit trail or no, Ace did a notebook page about George Washington Carver and if you ask him to tell you stories, you’d better sit down because it’s going to take awhile. Here are a few of pictures. 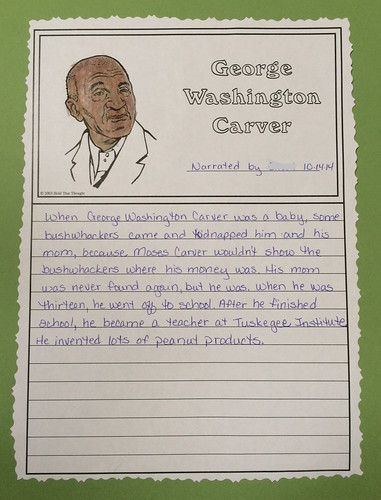 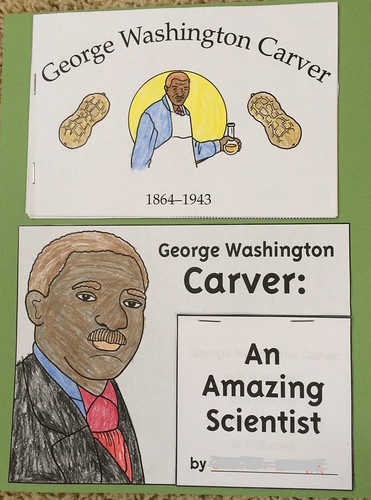 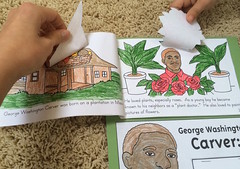 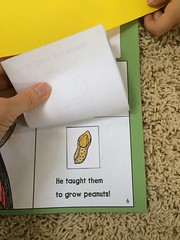 Sometime ago, we started making a Geography Notebook. We started out by learning a few of the basic geography terms and locations–such as, North, South, Tropic of Cancer, hemisphere, etc. The main book we used was one that

we checked out from the library called, Geography From A to Z: A Picture Glossary. This is a fun and easy book to learn basic geography terms from, partly because the illustrations are so nice. We also checked out and read the book, Maps and Globes by Jack Knowlton. This also has nice illustrations and simple text to help us understand how to read maps and globes. We enjoyed this book too, but the first one was more of a favorite.

All three of my older children joined in this endeavor, even the preschooler. Here are some pictures of the covers. Each one has at least one picture of Earth and then they each have a compass rose fold-up book. I can’t remember the name of this fold for my lapbook buddies, sorry. We just folded each of the four corners into the middle. When you open up the compass books there is a map inside. Here is a picture of JD Boy’s hand-draw map of our culdesac. We also have some pages on Latitude and Longitude. All of the Latitude pages are available at my Homeschool Launch profile. Here is the link to these Latitude Notebook Pages. I made this layered book of the important latitude divisions with G’tums, my preschooler. Each division is it’s own layer. This one is also available at Homeschool Launch. Here is the link. Zippy designed her own Longitude/Prime Meridian page. But I designed JD Boy’s and it also can be downloaded from my Homeschool Launch profile. Here is the link to that file. We also worked through this glossary of geography terms. This page is from the Homeschool in the Woods World Maps CD. Now that we have all these terms learned, we are working on learning about places. We are having even more fun with this part. We have been reading some interesting stories and biographies about different countries, but I will save that for another post…or several.

This is an old post, that I never got finished, until now.

You know I’m a homeschool mom, because I turn everything into a school project. I wonder sometimes if my kids get weary of my turning everything into learning opportunities, but they’re stuck with me and my ways. (Sorry guys!)
We’ve had company off and on over the last few months and we wanted to do some fun things with them, so we headed out to some local museums. The first adventure was to visit the Future of Flight museum. I didn’t get to go, because they don’t allow preschool aged children, (not that I’m a preschooler, but I have one…) so I stayed home and cooked up a big meal for everybody. Which, I thorougly enjoyed, and so did they, by the way. My older two kids along with their cousins, uncles, grandparents and dad went there though for a tour. They came back all talking at once. They had seen a 787. They had seen the largest building in the world by volume. They had seen the assembly line for the 747. They had all kinds of things to tell me. Unfortunately, they were not allowed to take pictures, but they did their best to describe everything they had seen. Then I did my homeschool mom act and made an assignment to each of my kids to write a report on their trip. They enjoyed the project enough, that they not only decided to write, but to design a page for their report. I gave them some help. They spent quite a bit of time searching online for pictures for their reports. The next trip we went on was to the Museum of Flight. Sound like we have a theme going? It’s not because we have been studying about airplanes or anything it’s just that these are what struck our fancy, but being that I’m a homeschool mom, I’m wondering if it’s time to do a lapbook on airplanes or the Wright Brothers or something! I don’t know though. Sometimes, I realize that I can’t make a full blown unit out of everything we do. There’s just not enough time. However, since my previous writing assignment turned out so well, I definitely have a theme going on that, and assigned another writing assignment. We were allowed to take pictures on this trip, and being that JD Boy has a new camera, he had his along, so he took lots of pictures and was able to use that for his page. Our third museum visit was to the Pacific Science Center. We actually have made several trips to the Science Center and I have to confess that I haven’t required writing assignments every single time. I should have, because there is so much to see there, that each time, they could write about something different. But you know, even homeschool moms, slack up once in awhile. This time even my preschooler decided that he wanted to make a report. Our pass still hasn’t expired, so I’m hoping to still get in one more set of reports out of them on the Science Center in the next few weeks. They each chose their own pictures again. JD Boy took all of his pictures. The other two, hunted down pictures on Flickr that were Creative Commons license. A very important shot–one of the Space Needle from the Pacific Science Center. All photos from both museums were taken by my 8 yo son, JD Boy.

So there you have it — three museums and three reports and I was able to count three days, that would have otherwise been discounted, as school days! After all, I have written reports to prove it now.

If you are visiting the Seattle area and are planning visits to any of these museums and would like copies of these notebook pages, feel free to email and ask.