We recently finished a unit on how life began. We had been studying ancient history for awhile, but had skipped over the prehistory sections, but I decided that for my older two children, in particular, it was time to address the theory of evolution. So we backed up and discussed some of the early chapters in our ancient history books. To be fair, I am a staunch Young Earth Creationist, so that did influence the course of our study. I suppose it was actually the study of evolution from the creationist viewpoint. I want my children to realize that evidence for the stories of Creation and The Flood are not only found in the Bible but in other ancient documents and that there is evidence for them in some scientific studies.

Here is a list of the sources that we used: 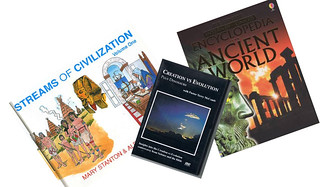 The Usborne Encyclopedia of the Ancient World: Internet Linked (History Encyclopedias) (This is a secular history book.)

Streams of Civilization: Earliest Times to the Discovery of the New World (Vol 1) (79555) (The first chapter deals with different ideas of origin.)

Beginnings (Creation/Old Testament/Ancients/Egypt) (I love all of the other Truth Quest History Books that I’ve used, but this one is not my favorite. But I’m still using the parts that I like out of it, since I have it.)

After we studied about origins from these sources, my three oldest children worked on lap books to show what they had learned. They all did a beautiful job on each lap book, but I plan to share those over the next few days.